Founder and CEO of The TCM Group

Originating from Nottingham in the East Midlands, David has extensive experience of mediation and dispute resolution within a variety of contexts. In the early nineties, David established Leicestershire Mediation Service – one of the first community mediation schemes in the UK. David ran the scheme for eight years and in that time he established the Conflict Resolution in Schools Programme (CRISP), was a founding member of the Midlands Mediation Network and he pioneered the use of restorative justice (RJ) to tackle youth offending. He was also active in numerous mediation, RJ, and community regeneration programmes across the UK.

In 2001, David established The TCM Group – Train. Consult. Mediate. His vision for TCM was, and still is, to reduce the negative impact of conflict at work by creating the conditions for employees and managers to have better conversations. For the past 18 years, David has been at the forefront of conflict management, mediation, employee relations and leadership best practice.

David has built a world class team of consultants and a head office team who work with numerous household names to develop and integrate person-centred and values-based systems, cultures and leadership practices. David was awarded his MBA with distinction after studying the use of mediation and ADR within three large organisations.

David tells people that he is a mediator through and through. However, he goes on to explain that the principles of mediation are so universally valuable (dialogue, compassion, empathy, respect, courage, trust and tolerance), that he has learned how to adapt them and to shape them so that they are relevant, not just for resolving a conflict, but in virtually every area of the modern workplace and indeed across our society.

Some of David’s recent assignments have included:

David has created the FAIR Model™ which is the benchmark mediation and investigations model in use in workplaces across the UK. It is used to underpin the development of ‘Fair and Just Organisational Cultures’. David has also created the INSIGHT – CHANGE Model™ to help managers and leaders to secure better outcomes from change programmes and transformation initiatives.  in 2014, frustrated with the corrosive and damaging systems for addressing issues in the workplace, David launched his innovative Resolution Policy™ which numerous  organisations have now adopted to replace their outdated discipline and grievance procedures.

David is author of ‘MANAGING CONFLICT’ (Kogan Page/CIPD) and he is working on his second book ‘MANAGING CULTURE for the same publishers (due for publication Spring 2020). David is a father of three beautiful children and, when he is not mediating or writing, he enjoys cycling and supporting the local Cub pack in his role as Akela.

“I worked with David to introduce an in-house mediation team within Royal Mail. David was extremely professional and helped from inception to completion. I would highly recommend him and his team.” Jane Fairhurst, Head of Employee and Industrial Relations at Royal Mail

“We are delighted to have had David as a speaker for our webinar series. He is a highly enthusiastic speaker who brings real passion and commitment. It was an engaging presentation and extremely well received by delegates.” Jane Nicholson-Biss Stakeholder Engagement Manager, The Institute of Leadership & Management

Had been impressed with a talk from David on achieving the benefits of ‘positive conflict’ so invited him / TCM to facilitate a process to optimise our Executive team-working. Really worked well: the power of professional external facilitation allowed us all to take more risk and confront issues in a more open way. Now have a great framework – both individual and team – for taking the team to an even better level of interaction: critical given the pressures we are facing in our business sector. And it was fun too! Robert Longley-Cook Chief Executive at Hft

“It’s very rare to come across someone who is quite so passionate about their area of expertise. David (and the whole TCM team) have been extremely professional, knowledgeable, supportive and not to mention a little patient as we work to implement our mediation scheme in TSB. But that’s not the half of it. What is really striking is David’s absolute belief and commitment that there is a better, more human, way of resolving conflict that benefits everyone from the impacted people to the wider business – it’s completely inspiring and wherever I go in my career from this point, the resolution of conflict is something I will focus on in a way that I never would have in the past. It’s been a pleasure to work with David and the TCM team and I hope that opportunity will crop up again in the future. His book is an excellent read as well.” Jonathan Goodger Senior Employee Relations Manager, TSB

Go back to the whole TCM Team 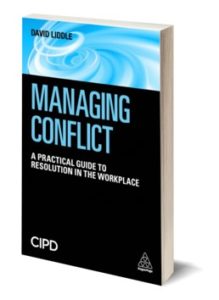 Managing Conflict. A practical guide to resolution in the workplace (Kogan Page/CIPD)

David Liddle’s new book. Managing Conflict (CIPD/Kogan Page), was written specifically for organisations who are considering introducing a Resolution Policy. It includes numerous toolkits and checklists to help you embed a culture of resolution across your organisation. It also includes case studies from Tesco, Arcadia Group, The Metropolitan Police, Capgemini and many, many others.

‘After the Dispute Resolution Regulations (2004) were repealed following my report, it was widely hoped that a system of Alternative Dispute Resolution (ADR) would emerge across the UK. Managing Conflict by David Liddle has highlighted some innovative and highly effective approaches and he has gathered first hand evidence about the powerful and lasting impact of ADR. However, David has also set out some very significant challenges (and some pragmatic solutions) that should be addressed by HR, unions, business leaders and policy makers if we are going to see a real shift in culture and policy regarding the management of conflict at work’. Michael Gibbons CBE, Independent Reviewer of DRR for Secretary of State, DTI, 2007